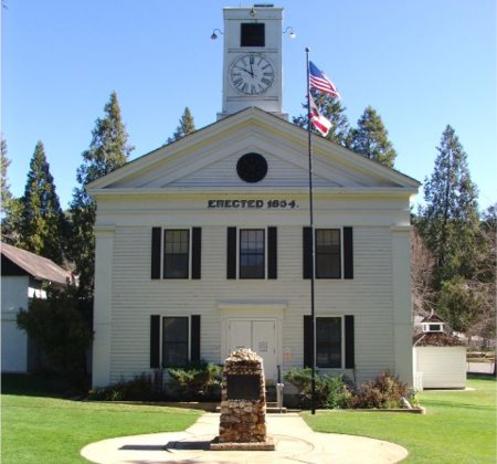 ​Excerpts from Images of America Mariposa County  by Leroy Radanovich

In 1806, a group of Mexican soldiers ventured into the valley of the San Joaquin, via San Juan Bautista and Pacheco Pass.  Upon crossing the San Joaquin River, they camped in a ravine containing a small stream. During the course of the afternoon, a sergeant of the troop became engulfed by swarms of butterflies.  One of the beautiful winged insects became lodged in the sergeant's ear and had to be removed.  The troop’s padre, Fr. Pedro Munos, noted in his journal the, “This place is known as El Arroyo de Las Mariposas [The Gulch of the Butterflies], because of their abundance.”

The name Mariposa was given to the new county formed in 1850, one of the original 27 counties of California, California's largest.  It was located on the western slope of the Sierra Nevada and contained more than 900,000 acres covering one-fifth of the state and was considered the “Mother of California Counties.” All or parts of 11 existing counties were formed from its original area.  First inhabited by several Native American tribes, the land that became Mariposa County saw a flood of miners and other white settlers to the area with the discovery of gold in 1849.  The county produced not only $48 million in gold, but also millions in copper, lead, zinc, and chromite, among other minerals.  Now home to more than 20,000 residents, as well as most of famous Yosemite National Park, Mariposa County takes pride in the history that lives in the Gold Rush buildings lining downtown Mariposa and Coulterville’s main streets and still standing in early mining towns like Hornitos and Bear Valley.

The town of Mariposa is located in the Sierra Nevada foothills at 1,953 feet in elevation with a population around 2,000 people. It is near the southern end of “The Golden Chain”, a string of towns that sprang up during the Gold Rush and many buildings in the historic downtown date from the 1800’s. For example, the historic Court House was built in 1854 and is the oldest court house west of the Rockies in continuous operation. The primary industries are tourism and agriculture. As county seat, it is home to local, state and federal administrative offices as well as medical facilities. Mariposa also has many cultural activities. There is an outstanding History Museum, art galleries, music concerts, plays, a Community Chorus, Storytelling festival and a Symphony Orchestry!

For more information about Mariposa, town or county, contact the Mariposa Chamber of Commerce at www.mariposachamber.org.